For our second night in Indianapolis, we had hoped to eat at Fogo de Chao with friends. Those plans fell through, so we ended up going to Morton’s the Steakhouse which was just down the street from Fogo. Of the four places we went to while in Indianapolis, Morton’s was the only disappointment.

The bread was a nice, large loaf of onion bread. It was toasty warm and served with good butter. We both ordered salads. Lance got the Center Cut Iceberg salad which is their version of “the wedge.” It was a quarter head of iceberg, with thousand island, blue cheese, tomatoes, bacon and egg. 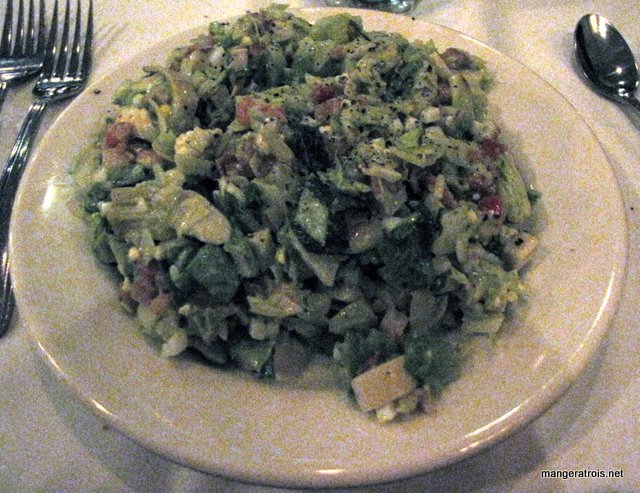 My salad was a chopped salad with lettuce, egg, tomato, hearts of palm, artichoke hearts, and maybe some other things as well. My salad was definitely the best part of my meal. I wish I could remember everything that was in it! 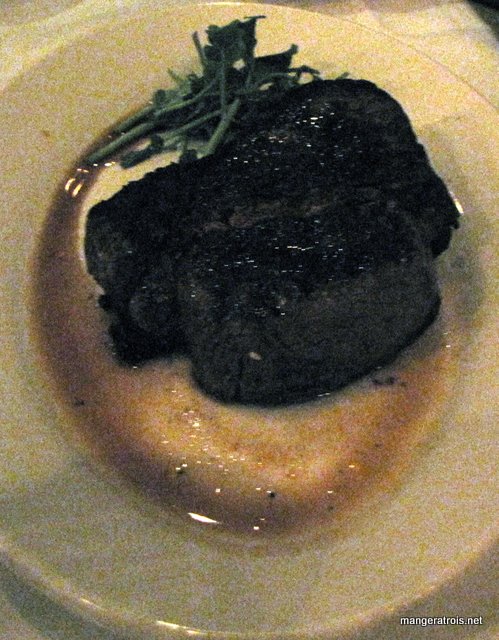 For our entrees Lance ordered the Double Cut Filet Mignon and I ordered the Sesame Encrusted Yellowfin Tuna. Both were overcooked which made for sad diners. 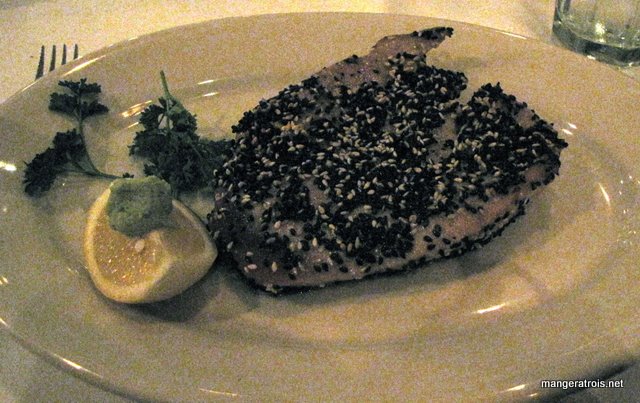 My tuna was grey throughout instead of the rare to medium rare I ordered. Sigh. 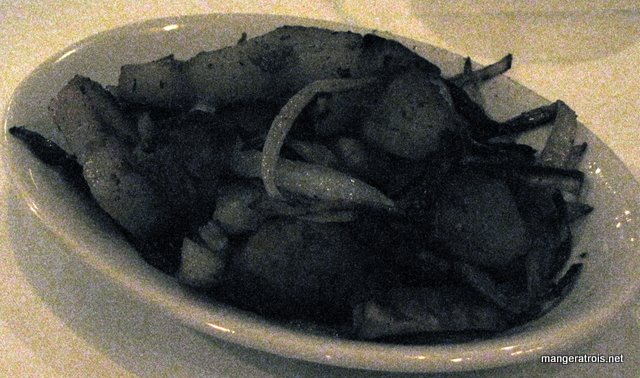 We also ordered Lyonnaise Potatoes which, sadly, were also overcooked to the point where they tasted burnt.

For dessert, Lance ordered the “Legendary Hot Chocolate Cake” which was nothing more exciting than the molten chocolate cake every restaurant seems to serve these days. I had the Double Chocolate Mousse which was amazingly rich and delicious. I’d given up on pictures by that point due to the lighting.

The service was fine, but nothing to write home about. Our waiter was friendly but seemed rushed due to the restaurant closing.

I’m not sure if other Morton’s are better, but I don’t see myself rushing to find out anytime soon.

Total price, including tip with no alcohol: Unclear.

Every year I have the pleasure of going to GenCon in Indianapolis, IN and, every year, I eat at some pretty great restaurants.  This year started off with a visit to 14 West with the recommendation of both Urbanspoon and the hotel concierge.  While the lighting was poor, which seems to be a trend in Indianapolis and a bummer for me, the food was delicious and surprisingly inexpensive.  The service was attentive and the overall experience is one I’d be happy to repeat in future years.

Due to the lighting, these posts won’t be quite as photo-heavy as previous restaurant articles have been.  I have come to the conclusion that, when making a reservation and being seated, I should just request a table with adequate lighting. 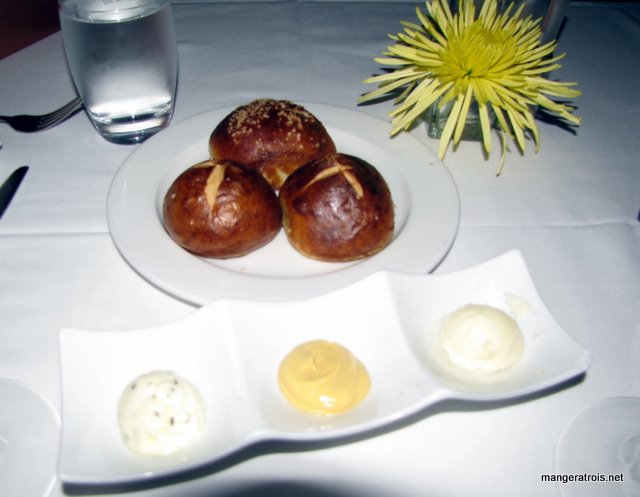 Our meal began with house made pretzel rolls and a choice of herbed butter, mustard, and regular butter.  The rolls were fantastic and fresh. 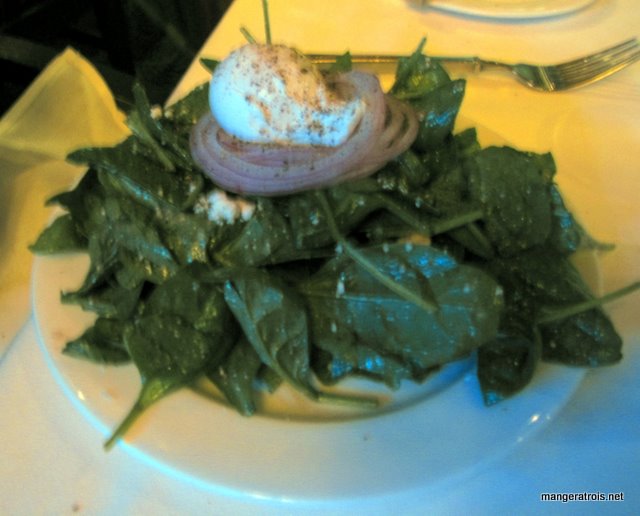 From there we had salads.  Lance ordered the spinach salad which was topped with a perfectly poached egg, feta cheese, crispy pancetta, balsamic vinaigrette, and red onion.  The egg yolk mixed with the vinaigrette to form a great dressing for the salad.  This is one of those techniques I’d love to try at home some time. 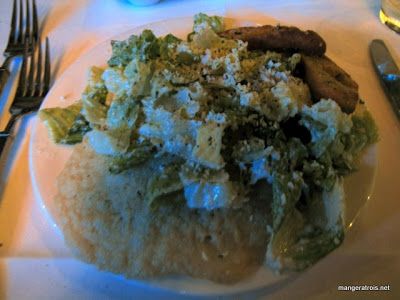 I had the Caesar salad which included a parmesan crisp and homemade croutons.  It was also fantastic.

For our entrees, Lance had the Chicken which, sadly, isn’t on the menu on the restaurant’s website, and I didn’t take notes during dinner!  I believe it was served with mashed potatoes.  The bite I had was nice and tender.  It’s also worth noting that most all of their meats were from local farms which is a huge plus in my book.  The picture of his dish didn’t turn out at all. I ordered the Crispy Duck Confit which was served with goat cheese and mushroom crepes and a cherry glaze.  Lance thought my portion was a bit small, but I found it to be just perfect.  The duck was crispy, amazingly flavorful, and the crepes were a fantastic pairing. 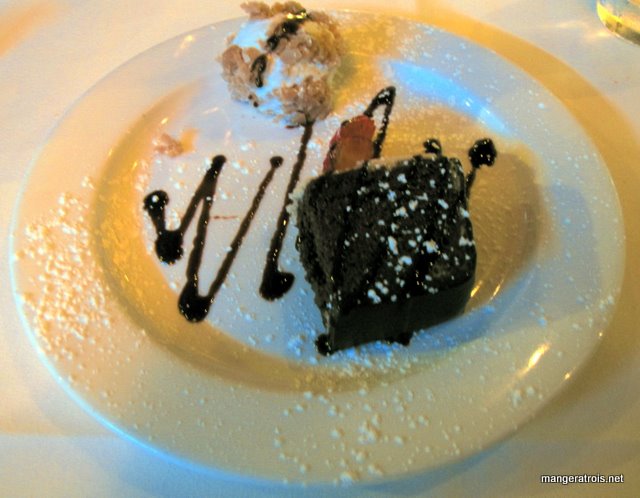 For dessert we opted to split the Chocolate Mousse Cake.  It was a hollowed out pound cake filled with rich chocolate mousse and served with a ball of toffee coated vanilla ice cream.

This was a great dining experience and I’d strongly consider going again next year.  The service was spot on, we were never left wanting for drinks or anything else.  The only downside of the whole meal was the lack of lighting.

Total price, including tip with no alcohol: Unclear.