2. Heat oil in 12-inch heavy-bottomed nonstick skillet over medium-high heat until just beginning to smoke. Reduce heat to medium and place both tenderloins in skillet, leaving at least 1 inch in between. Cook until well browned on all sides, 8 to 12 minutes. Transfer tenderloins to wire rack set in rimmed baking sheet. (The tenderloins will shrink some as they cook in the skillet, so don’t worry if you have to curve them to fit them initially.)

3. Pour off excess fat from skillet and return to medium heat. Add syrup mixture to skillet, scraping up browned bits with wooden spoon, and cook until reduced to 1⁄2 cup, about 2 minutes. Transfer 2 tablespoons glaze to small bowl and set aside. Using remaining glaze, brush each tenderloin with approximately 1 tablespoon glaze. Roast until instant-read thermometer inserted in thickest part of tenderloins reads 130*F, 12 to 20 minutes. Brush each tenderloin with another tablespoon glaze and continue to roast until thermometer reads 135 to 140*F, 2 to 4 minutes longer. Remove tenderloins from oven and brush each with remaining glaze; let rest, uncovered, 10 minutes. (I didn’t actually measure the glaze I used each time, since I had plenty.  I just brushed it on until it was, well, glazed each time.) 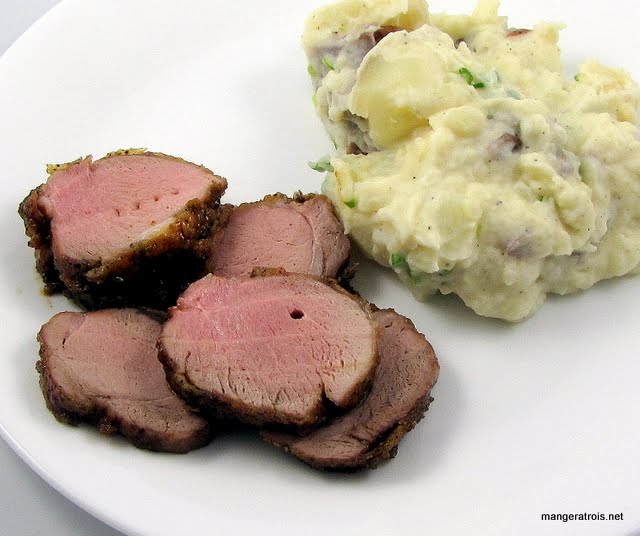 Comments
I’ve made many recipes for pork tenderloin over the years but this is, by far, the most flavorful.  The recipe is from the 2009 Cook’s Illustrated Annual and the guys could not stop eating it.  The sauce, which I forgot to add to the plate before taking the picture, was a great compliment.  The tenderloins smelled wonderful while cooking and all the spices just blended together fantastically.  The cornstarch coating helped to add nooks and crannies to the pork so that the glaze would adhere during cooking.

There is no doubt that I’ll be making this again – there are two other variations in the cookbook that I’m interested in trying at some point.