For the stir fry

Lance declared this the best tofu he’s ever eaten.  It was delicious.  The tofu was super crispy and wonderful.  I had a piece before adding it to the stir fry and it was delicious even then.  I actually forgot to add the soy sauce, oops, and it still rocked.  This recipe is from Budget Bytes.

2. Add cumin, red pepper flakes,  and garlic.  Cook and continue stirring for 1 minute.  Add chicken broth and stir, scraping up any browned bits from skillet.  Season with salt and pepper then decrease heat to medium-low.  Continue cooking until mixture is no longer soupy.  Remove from heat and drizzle with olive oil.

3. Sprinkle with cilantro before serving with lime wedges.

Comments
This recipe is from Simple Ginger. It was another I was recommended during my “use lots of ground beef” phase.  The chickpeas were definitely not crispy so I’m not sure I get the name of this recipe, but it was certainly tasty regardless of the texture.  I served this over rice.

Instructions
1. Heat oil in large saucepan over medium heat.  Add onions and sauté until soft.  Add garlic and ginger and cook, stirring, until fragrant, about 1 minute.  Add tomatoes, garam masala, turmeric, and salt.  Cook, stirring occasionally, until tomatoes break down and form sauce, about 20 to 30 minutes.

3. Add oil to skillet, about 1⁄4-inch deep.  Heat over medium heat.  Fry balls, working in batches, until golden brown on all sides.  Remove from pan and drain on paper towel-lined plate.

4. Serve sauce on top of rice with Kofta balls on top. 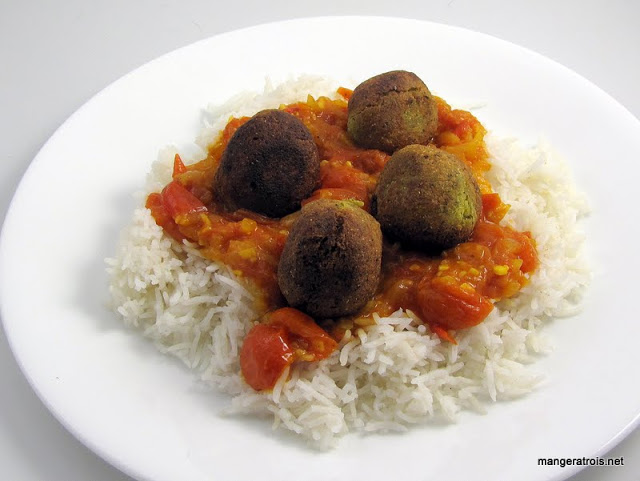 Comments
This recipe is from Food-Fitness-FreshAir.  It’s one of the tastier things I’ve made recently and it’s vegan as well!  I doubled the Kofta ingredients and this made a great meal for the three of us.  I probably could have quadrupled everything so that we could have enjoyed more leftovers, but I didn’t think of that until it was too late.  I’m looking forward to making this again in the future. 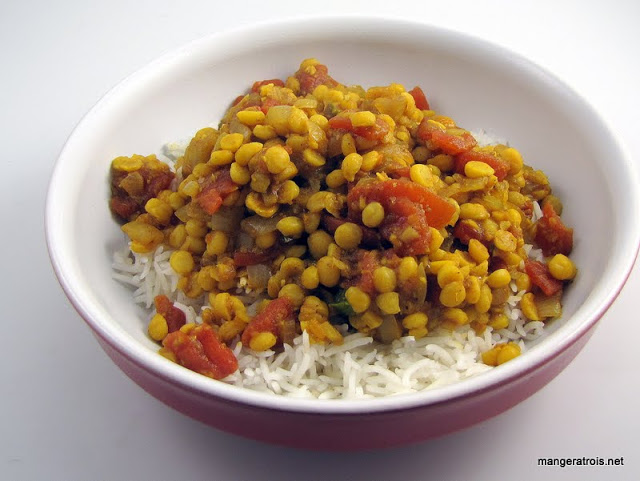 Comments
This recipe is from Smitten Kitchen, one of the few blogs I actually read on a regular basis.  I was looking for something to do with the Chana Dal I bought a few months ago and this seemed like a good way to use some.  I was happy with the results, but I felt it could have used something more.  Maybe some cream or coconut milk or something similar.  I heated up leftovers with a pat of butter and that added that last bit of oomph I was looking for.

Instructions
1. Place lentils in a pressure cooker. Fill cooker halfway with water and rinse the lentils by rubbing them between your fingertips. Drain water and repeat three or four times, until the water remains relatively clear; drain. Now add 3 cups water and bring to a boil, uncovered, over high heat. Skim off and discard any foam that forms on the surface. Stir in the ginger and garlic. Seal the cooker and allow the pressure to build up. When the cooker reaches full pressure, reduce the heat to medium-low and cook for about 45 minutes. Remove the cooker from the heat and allow the pressure to subside naturally (about 15 minutes) before opening the lid.

2. Meanwhile, combine the yogurt, heavy cream, salt, garam masala, and cayenne in a blender jar. Puree, scraping the inside of the jar as needed.

3. Once the lentils are ready, stir in the butter and the creamy paste. Sprinkle with the cilantro, and serve. 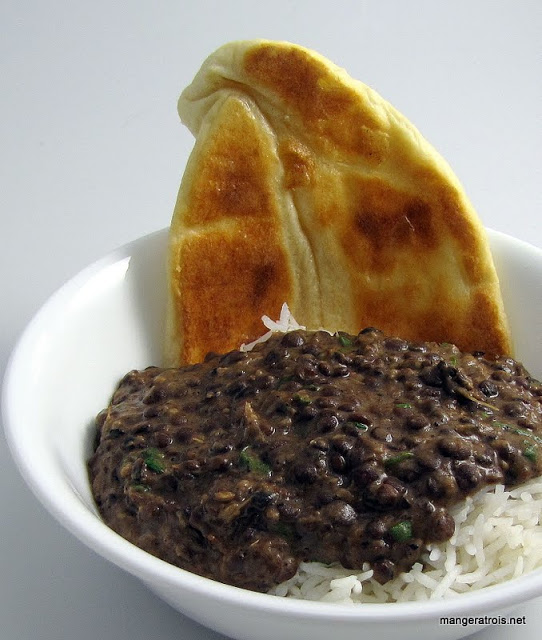 Comments
This recipe is from 660 Curries which is a recent addition to my cookbook collection.  I have had this dal in restaurants before and it’s one of my favorites, I was super thrilled to see a recipe for it in my new curry cookbook so I could give it a whirl.  Sadly it uses a pressure cooker… do people still own these?  I actually do but I think I haven’t used it since the week I bought it, some years ago.  I’m sure this can be replicated without a pressure cooker; the beans will just take more time to cook.

This recipe was pretty easy to bring together.  I used my mini processor to make paste of the garlic and ginger and from there it was easy, if not quick.  I did find it to be a tidge on the salty side, so I’d recommend reducing the salt content a bit from what it calls for.  Perhaps 1 teaspoon or even just a 1⁄2 teaspoon.  I also found myself out of yogurt and cream due to poor planning so I used coconut milk instead.  This worked quite well!  This dal was certainly as good as the dals I’ve had in restaurants.

Instructions
1. Place onion and bacon in slow cooker.  Check beans for stones then rinse and place on top of bacon.

2. Mix brown sugar, molasses, mustard, black pepper, and water in large bowl.  Pour sauce over beans.  Cover and cook on HIGH for 6 hours or until beans are tender. 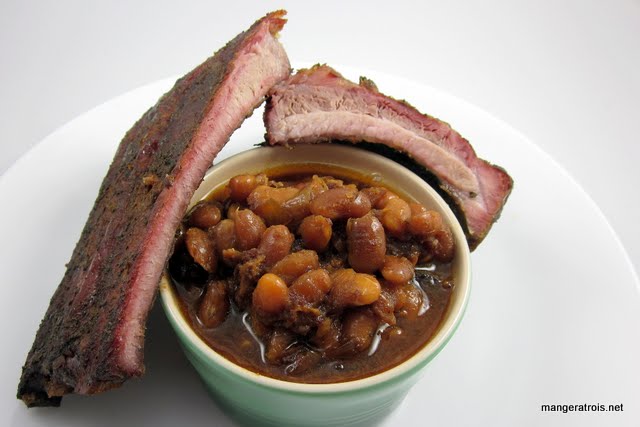 Comments
This recipe is from Budget Bytes.  I really liked baked beans as a kid and I’ve been interested in making them for a while.  These were nice and bacony but there was a weird taste that I couldn’t pinpoint, an almost burnt sort of taste.  These were good, but I’m not sure if I’d make them again due to that weird taste.

Shown here with smoked ribs.  It’s hard to post recipes for smoked foods since they’re pretty simple.  In this case we slathered the ribs with mustard, spread a rub over them, and smoked them at 220*F until they reached about 165*F, around 4 to 5 hours.  They were great.

2. Transfer mixture to large bowl and stir well if you pulsed ingredients in batches.  Cover and allow to rest for 30 to 60 minutes. 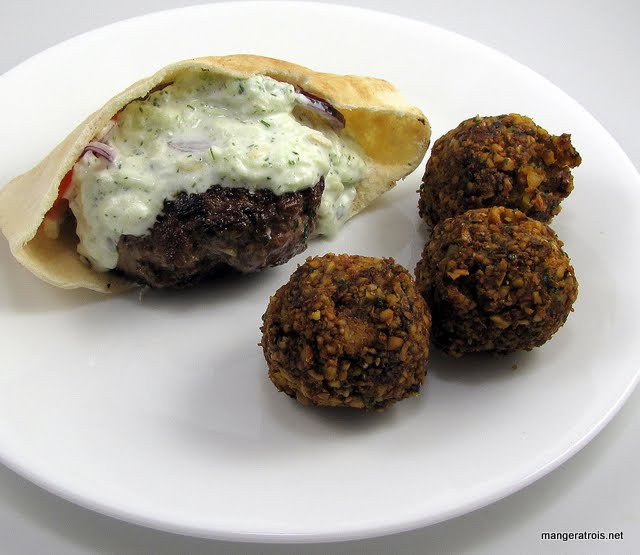 Comments
I have only recently become a falafel addict and I decided, after having them a few time in restaurants, that it was time to try my hand at making my own.  I found this recipe from The Hummus Blog.   These are delicious falafel however, they’re quite a bit different than what I’ve had before.  The texture, due to the ground soaked chickpeas, resembles chopped nuts more than the smoother falafel balls I’ve had before.  I would definitely make this recipe again in the future, but I’ll also be on the lookout for other (recipes that might be closer to what I’ve had in restaurants.

Shown here with Lamb Burgers and the most amazing Cucumber Yogurt Sauce.  A delicious meal all around.

Instructions
1. Heat sausage in Dutch oven over medium heat until fat renders and sausage is browned, about 8 minutes. Using slotted spoon, transfer to paper towel-lined plate, cover, and reserve in refrigerator. Cook onion, bell pepper, and celery in sausage fat until softened, about 5 minutes. Stir in garlic, oregano, thyme, 1 teaspoon salt, and 1⁄2 teaspoon pepper and cook until fragrant, about 30 seconds. Add broth, beans, and bay leaf; bring to low boil, then reduce heat and simmer, covered, until beans are just beginning to soften, about 20 minutes; transfer to slow cooker.  Cover and cook on LOW until beans are completely tender, 4 to 5 hours (or cook on HIGH 3 to 4 hours).  Note: If the beans appear too dry around the last hour of cooking, stir in an extra 1⁄2 cup of water.

2. Remove bay leaf.  Transfer 1 cup bean mixture to food processor and process until very smooth, about 1 minute. Stir pureed beans and reserved sausage into slow cooker, cover, and cook on HIGH until heated through, about 10 minutes. Season with salt and pepper. Serve with rice.

Note: I processed the onion, red bell pepper, and celery in my food processor, since I was running short on time.  This worked well. 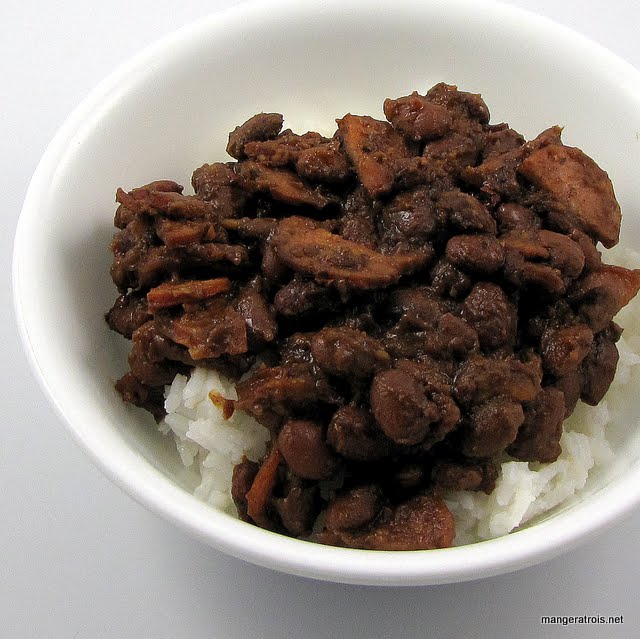 Comments
Technically this recipe should just be named “Slow Cooker Red Beans” because it doesn’t include instructions for preparing rice, but I’ll stick with the name the way it is.  My rice cooking method is 2 cups of rice and 4 cups of water in a saucepan, bring to boil, reduce heat to low, cover and cook for 20 minutes.  Works like a charm every time.

Up until this point, my only experience with Red Beans and Rice has been from the box that says Zatarans.  I’ve never been a fan, it’s entirely too spicy for me even if I dilute it with extra rice.  But Art loves Red Beans and Rice so I figured I would try this recipe out for him and, if it had the same pitfalls as the boxed stuff, I could always eat leftovers.

Wow, was it tasty!  The texture of the beans was great, they weren’t as broken down as they are in the box sort.  The flavors were spot on as far as I could tell, and the spice level was perfect for me.  Just a little heat but nothing overwhelming.  The true test was Art, since he’s the Red Beans and Rice connoisseur, and he loved it.  I declare this recipe a resounding success and it’s all thanks to the 2009 Cook’s Country Annual.